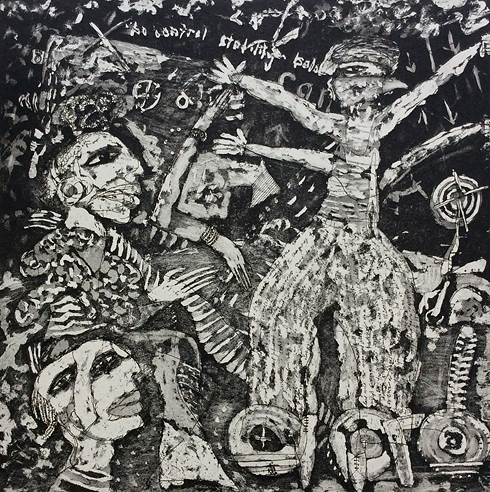 
Robert Shaw is a painter and printmaker based in Kirkwall, Orkney and Edinburgh. He became interested in printmaking whilst still a young trainee lawyer, and began developing his skills in etching, aquatint and drypoint at Edinburgh Printmakers. After moving to Orkney in 1980 he helped found Soulisquoy Printmakers. Elected a Professional Member of SSA in 1981. He was appointed to the Board of the Pier Arts Centre and for a number of years was chair during the prizewinning redevelopment of the Centre to. He has exhibited in group exhibitions throughout Scotland, the UK and Europe, been selected for prestigious exhibitions in Finland and Yugoslavia, and has held one-man exhibitions in the Pier Arts Centre, Talbot Rice Gallery, Edinburgh Printmakers, Peacock Printmakers, and Highland Printmakers.

Shaw’s work is full of symbolism and dark humour, as well as scenes derived from mythology that often deal with the absurdity of human ambition and its failings. Bulbous and spiky, his unusual and sometimes grotesque characters gather and congregate in carousels, cafes and showgrounds; they journey, play, build strange machines and generally revel in the absurd industry of life.