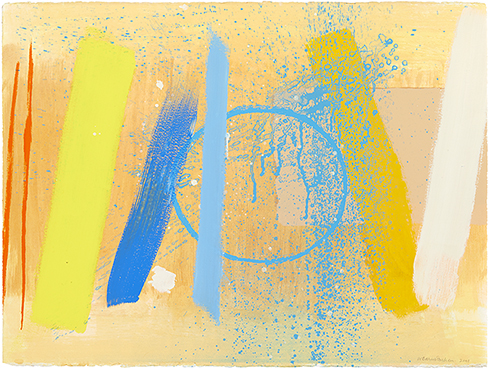 
Glasgow Print Studio is delighted to present an exhibition of work by the late Wilhelmina Barns-Graham.

Wilhelmina Barns-Graham was born in St Andrews in 1912, and studied at Edinburgh College of Art from 1931 to 1937. She settled in St Ives in Cornwall in 1940, where she found a well-established artistic community, which was also beginning to attract a new generation of artists, such as Ben Nicholson and Barbara Hepworth. For the next sixty years she lived and worked in St Ives. However, in 1960 she inherited Balmungo, a house on the edge of St Andrews, and after that she spent a part of every year in Scotland.

Barns-Graham was first and foremost a painter, but she made prints throughout her working life, trying many different methods such as etching, linocut, lithography and screenprinting.  All her published prints were made in collaboration with master printmakers. Their technical expertise was essential, enabling her to translate her way of working into a different medium.

During the last 10 or so years of her long career, printmaking became a central part of Barns-Graham’s practice, particularly after 1998 when she began working with Graal Press. Earlier prints such as a group of screenprints made with Kip Gresham at Curwen Studio in 1991 and three etchings she made with Rachel Kantaris in St Ives in 1996 were often based on existing original works.

Later, working with Graal Press’s Carol Robertson on a series of over 60 screenprints, these were mostly entirely original - envisaged and made purely as prints - though a conversation with ongoing painting series was often maintained. This exhibition examines for the first time the fascinating and dynamic relationship between these two distinct areas of Barns-Graham’s practice, by showing related paintings, prints and overpainted prints together.