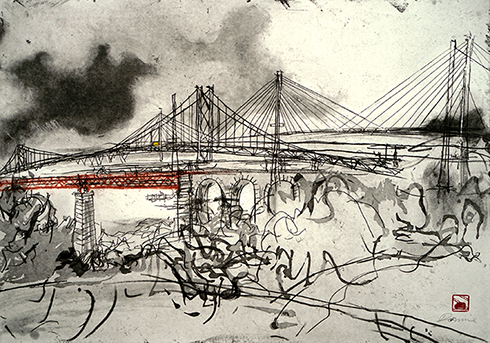 ‘Study for Three Bridge Evening’ (above) is a new publication by Kate Downie co-published at Glasgow Print Studio in collaboration with Master Printmaker Stuart Duffin and presented with a retrospective of her previous bridge prints.

Kate Downie was born in America of British parentage, but returned to live in the North East of Scotland at the age of 7. She studied Fine Art at Gray’s School of Art, Aberdeen, graduating in 1980.

She has taken part in artists’ residencies in the USA, Amsterdam, Paris, Corsica and Norway and China. During her career Downie has established studios in places as diverse as a brewery, a maternity hospital, an oil rig and an island underneath the Forth Rail Bridge.  Her ongoing relationship with the Forth Bridges was made manifest in 2014 when she was selected as official resident artist for the Forth Road Bridge during its 50th Anniversary. 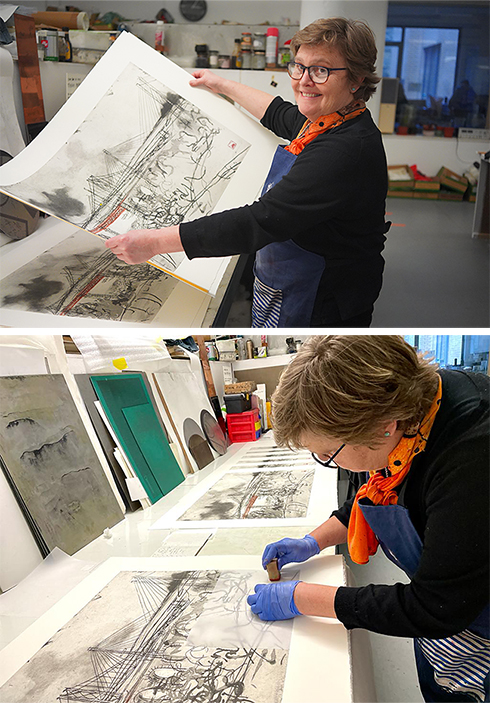 As President to the Society of Scottish Artists from 2004 to 2006, Downie co-curated contemporary visual art projects of international standing, including an exchange exhibition with Indian artists and the ‘Bodyparts’ live art Festival at the RSA in Edinburgh.

Like the Scottish Artists Joan Eardley and DY Cameron in the last century, Downie has spent the past 25 years exploring an artistic vision for both the extremes of a Scottish urban/industrial landscape and Scotland’s coastal ‘edge-scapes’. During lockdown she explored a more conceptual approach to the secret world of plants & trees over time, and how they impact on our lives.

Downie's work appears in many public and corporate collections worldwide. In 2005 the artist was shortlisted for the Jerwood Drawing Prize, and in 2008 became a member of the Royal Scottish Academy. Until the end of 2021 Kate Downie was chair of Development for the RSA where she has recently been hosting a series of country-wide ‘Live at the Academicians Studio’ events via zoom. She has been a trustee for both Art in Healthcare and the Wilhelmina Barns-Graham Trust in the past ten years. 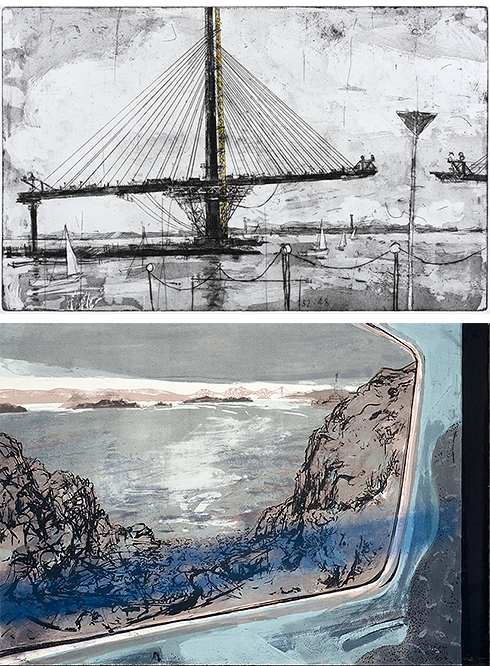 Kate Downie has been represented by The Scottish Gallery for many years and has had several solo exhibitions there since 2007. In 2017, she created ‘Anatomy of Haste’ for the Edinburgh Festival exhibition, with this latest body of work showing a new direction inspired by her current surroundings but also as a personal response to nature in Lockdown.  Kate lived and worked in Edinburgh for many years and relocated to Fife in 2018 where she now has a beautiful purpose-built studio.

Spring 2022 sees the launch of a new Forth Bridges print edition ‘Study for Three Bridge Evening’ co-published at Glasgow Print Studio, to coincide with the New Acquisitions Exhibition at the City Arts Centre, Edinburgh, where her large charcoal drawings are featured. All this launched fresh on the heels of another exciting Glasgow  project created in conjunction with Glasgow Museums to honour Joan Eardley’s 100th anniversary.  Autumn this year sees the conclusion of Outside Edge, an international collaboration with artists from Beijing and Brighton which began on Mull in 2019, culminating in a bi-lingual publication and exhibition opening in the Royal Scottish Academy Finlay Rooms and touring to Beijing in 2023.

Click here to see more works from the exhibition.