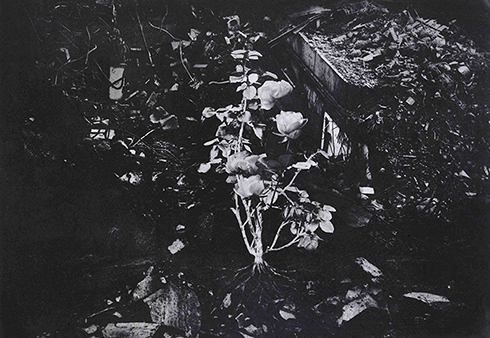 
Metamorphosis, Ariadne and the Minotaur

For this exhibition, Linda Kosciewicz has created a sequence of polymer photogravures which use myth to explore the war in Ukraine. These images have been created using photography, montage and digital drawing.

In 2021, as a response to the experience of the Covid pandemic, Kosciewicz began to look at the Greek myth of the labyrinth, Ariadne and the Minotaur in relation to ideas of journeys of self discovery and enforced confinement; and then later when the war in Ukraine began this widened to violence, abuse of power and toxic masculinity.

The labyrinth has both positive and negative aspects and these are embodied by Ariadne - positive - and the Minotaur - the negative. Ariadne’s experience of the labyrinth is one of self discovery and hope as she journeys through the complexities of the labyrinth, successfully finding her way in and out. 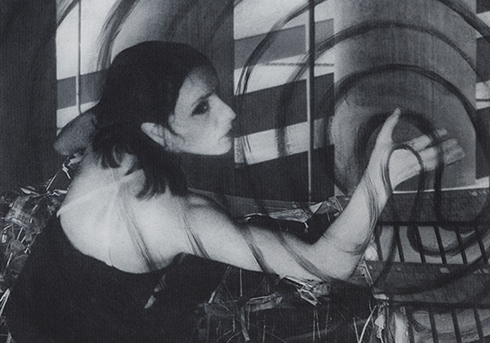 But the labyrinth is also a site of repeated violence epitomised by the Minotaur, who was both victim and perpetrator and suggests the inescapability of the brutality in the human condition.

Ariadne provides a symbol of hope and peace though she is witness to these cycles of violence and chaos executed by the Minotaur.

"I remember, at that point in time, the despair and futility evoked by the Ukraine war was almost overwhelming."

The works entitled 'The Rose that Grew in the Wasteland' and 'The Rose and the Minotaur' explore hope - symbolised by a white rose, in the aftermath of war.

"It was important to me to imagine that no matter the devastation and suffering, the human spirit would prevail. Only the shadow of the head of the Minotaur remains in the final image." 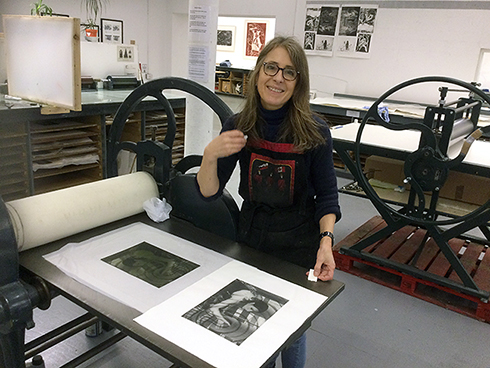 Linda Kosciewicz was born in Scotland in 1960 and studied painting and printmaking at Duncan of Jordanstone College of Art, Dundee followed by Conservation of Paintings at the University of Northumbria.

Over the past 15 years she has worked mainly in intaglio (particularly gravure) and lithography as well as drawing and mixed media. Her earlier work was performance based photography where she would explore ideas about current and personal events using cultural and literary sources.

Over the past couple of years, and throughout Covid, Kosciewicz has explored the stories in Greek myths, using them to express her personal experience of Covid and life events. She has focussed on the stories in Ovid’s metamorphosis, particularly on Daphne and also on Ariadne, the labyrinth and the Minotaur.

Linda Kosciewicz's work is held in public collections in Scotland and she have exhibited throughout the UK and Europe, and in Malaysia.

In 2011, Linda was a finalist in the International Photography Open Salon, Arles, France with the image “Breath of Life” a polymer photogravure from her White Series. That same year images from the White Series were published in the Plath Profiles and more recently in the journal in 2019.

In 2012 she won the Pauline Fay Lazarus prize for work based on the human body and in 2010 and 2012 respectively, received Visual Arts Awards from Fife Council, Scotland for photography and multi media projects. The first “Nine thoughts: A riff on fragmentation and loss” was about the impacts of dementia on close family members included music written and performed by the artist. Mirror Mirror considered body image and the male gaze.

Dance and music were key elements of the video and photography project Transformations: Life Portraits that she carried out for the University of Edinburgh. It explored life course and movement through ageing bodies. Using four volunteers from the Lothian Birth Cohort, Linda choreographed a sequence of movements which she set to a deconstructed piece of music from 1936, the year the participants were born.