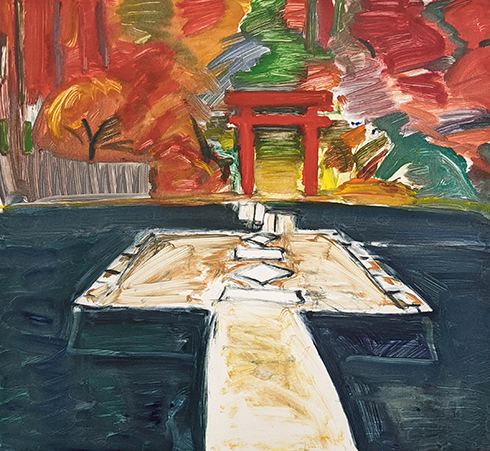 
John Houston (1930 - 2008) was one of the most distinguished painters of the postwar Scottish school. Born in Fife, Houston trained at the Edinburgh College of Art (1948-54) under Gillies and Blyth. He joined the staff of the College the following year, after time spent travelling in Italy with fellow student David Michie, and rose to become Deputy Head of the School of Drawing and Painting until his retirement in 1989.

Houston married the painter and printmaker Elizabeth Blackadder in 1956 and they travelled widely as a couple. He also explored printmaking, making a small, powerful body of editions and monotypes, the latter of which particularly retain his direct aesthetic style and rich, sensual colours.

His subject matter included still life and the human figure, but it was his fascination with land and sea that was his truest focus. He took his major inspiration from the East Coast of Scotland and the image of Bass Rock, out in the North Sea off North Berwick, became almost his personal emblem.

His vibrant, expressive works are some of the most distinctive Scottish works of the Post War period and are held in collection at many Scottish galleries and museums, including the Scottish National Portrait Gallery, Aberdeen Art Gallery, Hunterian Gallery, National Gallery of Scotland and Perth Museum and Art Gallery. Houston was elected to the Royal Scottish Academy in 1972. He was honoured with a major retrospective at the Scottish National Gallery of Modern Art in 2005 and awarded and OBE in 1990.

Please see here for a full list of all available John Houston works.

Some unique works are on display framed and may be purchased directly from the gallery.