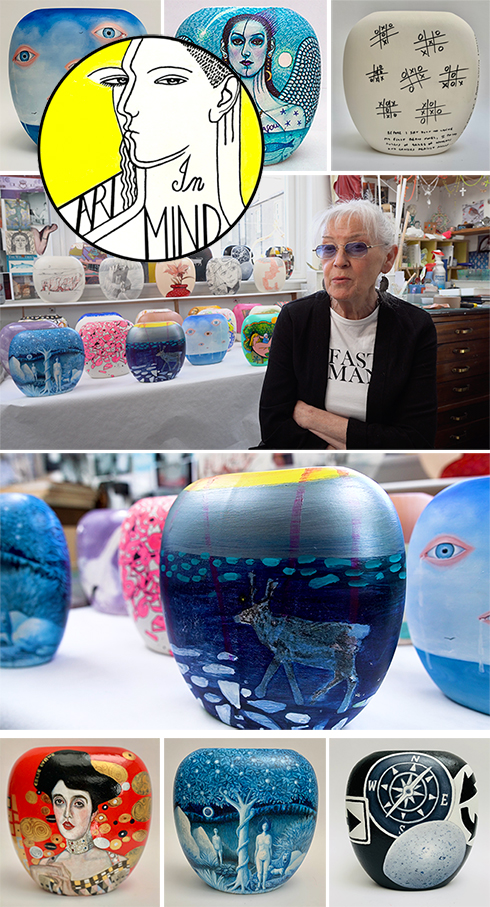 
Thanks to the commitment and enthusiasm of artist June Carey, an extraordinary group of contemporary artists have come together in support of Art in Mind, with each artist having created their own unique image on a ceramic vase.

The specially created artworks will be exhibited at Glasgow Print Studio from 18th to 29th May, alongside a timed online auction with Lyon and Turnbull running 23rd to 30th May. All proceeds will be donated to The Scottish Association For Mental Health (SAMH).

"Over the years, I have become increasingly aware of the number of people whose lives have been touched in some way by mental illness. Although largely invisible, mental illness can be devastating, not only to sufferers themselves but also, by association, to their families and friends. So much human potential is lost, and so many lives blighted. It was this thought, along with the desire to do something to help, that led to the creation of ‘Art in Mind’.

Thankfully, today, many public figures are talking about their own mental health challenges, which undoubtedly encourages more open discussion in the general population. This, in turn, helps to reduce stigma, thereby making it easier for people to seek help when they need it.

The current pandemic, however, has caused a dramatic increase in mental health problems, and funding for the mental health charities which provide support to sufferers is needed more urgently now than ever." - June Carey RSW, RGI

A video by Jack Hand of Steadyhand Productions featuring some of the vases in production and more images of the vases can be seen on the 'Art in Mind' social media pages: