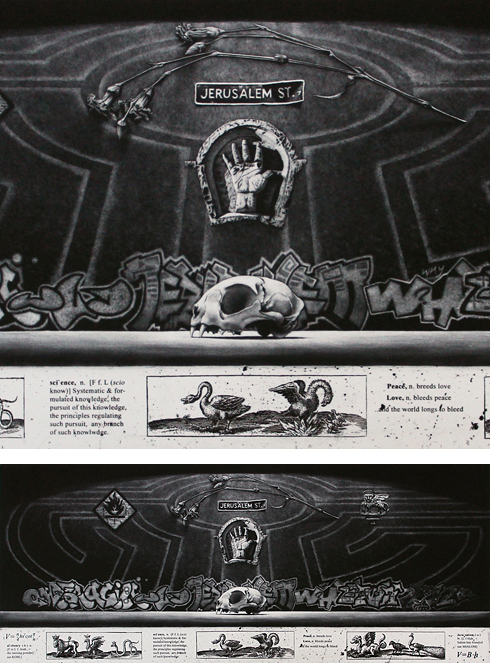 
The date was 9/11, and Stuart Duffin’s exhibition 'Sacred Science' had recently opened at the Glasgow Print Studio. As a result of the 9/11 attacks on New York and Washington, the art press said “this exhibition of work inspired by trips to Jerusalem suddenly takes on a deadly accuracy”. In the intervening twelve years, Stuart Duffin has continued to develop a keen interest in the twin themes of conflict and resolution within both science and religion.

Since 1996, and furthermore having recently completed two residencies in Jerusalem within the last year, the city with the burden of historical and contemporary baggage that it bears has remained the foundation for all of Duffin’s artistic output. He sees the welfare of Jerusalem as a barometer to the wellbeing our own basic humanity, not only as individuals, but collectively as a global society.

This current exhibition is titled 'Reason or Revelation' in reference to “the world of the philosopher or the world of the mystic”. It also refers obliquely to the extremes in media the artist has deliberately used in the exhibition; that of 16th century mezzotint and etching set alongside 21st century digital printmaking.

Born in 1959, Duffin studied at Gray's School of Art, Aberdeen from 1978 to 1982, graduating in fine art printmaking. He has been a member of staff at the Glasgow Print Studio since 1984 working as Studio Manager from 1989 - 2002 and currently as the Studio Master Etcher.

He is Fellow of the RE (Royal Society of Painter-Printmakers), an Academician of the RSA (Royal Scottish Academy), a professional member of the SSA (Society of Scottish Artists) and a member of the IMS (International Mezzotint Society).

Reason or Revelation
A PDF catalogue featuring works from the exhibition is available to view or download
A fascinating documentation of Stuart Duffin's exhibition which also features an interview by Melanie Sims with composer Malcolm Lindsay discussing his personal reaction to the work and an insight into the thinking that lies behind the title of the show and imagery employed by Stuart himself. Click here to view.

Come along for an informal gallery discussion with our very own Master Printer, Stuart Duffin. This will be followed by a demonstration in the main printmaking workshop exploring the intaglio and mezzotint processes employed by Stuart.

Image: Stuart Duffin, ‘Where the Road Leads Cursed and Charmed’ (with detail above), mezzotint with etching, paper size: 28 x 58 cm.