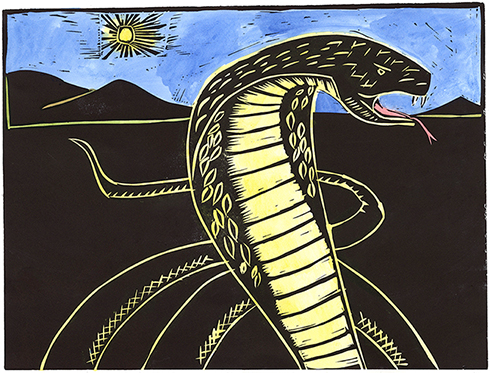 Damian Henry's lifelong love and fascination for animals and birds has created many memorable images. The current spotlight on endangered species extends his focus. This exhibition is the result, with new, large dramatic, powerful prints making an impact. These hand-coloured relief prints are accompanied by Henry's characteristic fine line etchings of jaguars, tigers, cats, dogs, and many more.

As celebrated painter, Adrian Wiszniewski says, "His depiction of animals, birds and insects show the greatest sensitivity. Creatures great or small are all given equal care and consideration in the sincere belief that each is intrinsically beautiful." To survive, all creatures, be they leopard, cobra, eagle or domestic cat, are themselves hunters. The world's problem of endangered species comes about when we humans shift the balance. Sadly, there is today nothing 'natural' about the destruction and devastation meted out by man on all the planet's vulnerable wildlife. Meanwhile Damian Henry's wonderful new prints continue to celebrate the many magnificent members of our natural world. Henry shows a deep understanding of the quiet stillness of the animal’s solitary life and approaches his subject matter intuitively. He chooses to portray magnificent creatures with a raw playfulness and it’s this informal honesty that lies at the heart of all Damian’s work. Critic Leyla Sanai explains, "He seems able to turn his hand to any animal: tiger, dog, puffin, cat, panda, frog, giraffe - all being conjured up by his deft skill. He makes it look easy, yet these fluent lines are the result of the time-consuming and difficult process of etching acid, aquatint or hacking into lino. There’s no evidence of the toil involved. They seem effortlessly perfect. Henry’s love for animals is apparent."

Damian Henry graduated from Glasgow School of Art in 1999 and has exhibited widely since then. Damian has been a member of Glasgow Print Studio for over three decades.