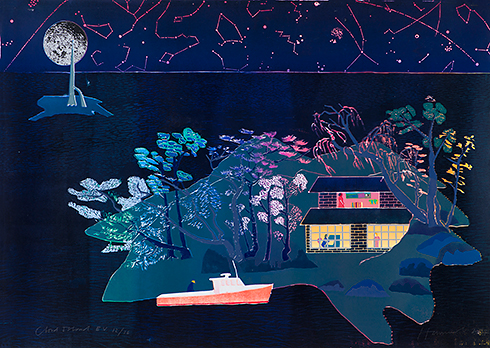 Glasgow Print Studio is delighted to present a mid-career retrospective of works in print by the internationally renowned artist Tom Hammick (b.1963). It is Tom’s first solo presentation in Scotland and presents works spanning 15 years of his printmaking practice. In addition, Tom is producing a suite of new prints in collaboration with Glasgow Print Studio Master Printmakers, to be launched at a later date. Stage proofs from this suite are included as part of the exhibition. Also included in the exhibition are works produced at print workshops across the globe, from Aberdeen to Newfoundland to Tom’s own “minute” workshop situated in his home in the south of England.

"All my images start from an amalgam of personal experiences and reflections of family life, newspaper cuttings, plots from plays and operas, lines from poems; I am interested in re-creating props and staging as a framework for stories in a setting as a way of describing what it is like to be human. So all my works have a specific narrative element to them; however veiled. There is a hook that gives me the impetus to make pictures that I hope are open ended enough that they can be personalised and become appropriated by others." 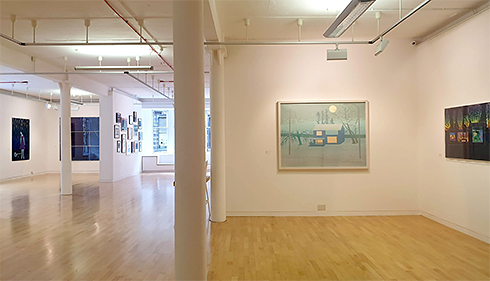 This is a unique opportunity to gain insight directly from the artist into the thought process behind the works on display, his inspirations and the techniues which he employs to achieve his striking images.

This event is free but ticketed. Please register via Eventbrite: https://www.eventbrite.co.uk/e/artist-talk-tom-hammick-tickets-73433205695 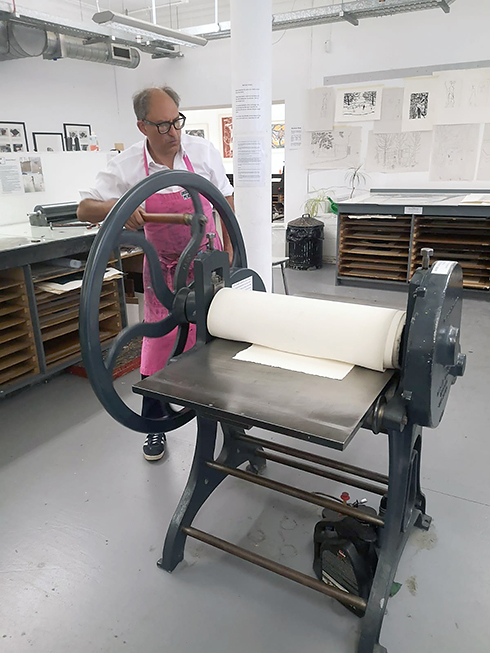 Tom has described landscape in his work as a metaphor to explore an “imaginary and mythological dreamscape.” Drawing from a wide range of sources, from Japanese woodblock prints to Northern European Romantic painting and contemporary cinema, Hammick’s depictions of isolated human dwellings grounded in uncanny dream-like settings summon the uneasy atmosphere of a psychologically-charged thriller, or a dystopian suburban nightmare.

His imaginative and emotional exploration into the human condition explores questions about place and transience and asks questions as much about home, where we belong, and how the ideas of a connection to place conjure up aspects of who we are and how we live. His images often are centred around inhabitants living on the fringes or outskirts of society, as metaphors for how artists of all sorts find themselves often on the outside looking in as the obvious vantage point for filtering the copy of life and acting as barometers of the state we are in.

Working with Master Printmakers at Glasgow Print Studio, Hammick has begun work on a new series of coloured etchings which include ‘Narrow Road to the Deep North’ from which the title of this show is taken. A selection of these new works are on display as unfinished works-in-progress. 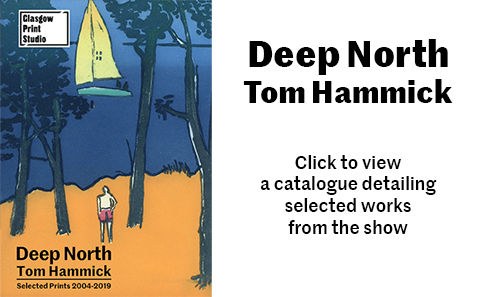 Tom was the winner of the V&A Prize at the International Print Biennale, Newcastle, UK in 2016, his print Violetta and Alfredo’s Escape (2016) was subsequently obtained by the V&A, and he has recently been awarded the prestigious Joseph Albers foundation Fellowship in 2019. Tom has work in many major public and corporate collections including the British Museum (Collection of Prints and Drawings); V&A (Victoria and Albert Museum), UK; Bibliotheque Nationale de France (Collection of Prints and Drawings); Deutsche Bank; Yale Centre for British Art; The Library of Congress, Washington DC, New York Public Library and Minneapolis Fine Art Institute. He is currently senior lecturer in Fine Art, Painting & Printmaking at University of Brighton.

Tom has exhibited widely both nationally and internationally. Highlights of Tom’s exhibitions from the past 5 years include his solo show, Wall Window World in 2015, exhibited in Bridports Art centre, Flowers East Gallery in London, Flowers New York and Gallery Podromus in Paris. Tom successively solely curated Towards Night at Towner Gallery, Eastbourne (2016), which displayed a collection of over 60 artists spanning across 200 years and their individual exploration of the ‘nocturnal’, and subsequently his solo show, Passes Between Us, was displayed at Rabley Drawing Centre, in 2016, which exhibited paintings and prints on paper that were inspired by his ENO residency. Lunar Voyage, a collection of 17 woodcuts made in Scotland and London in 2017/18 were exhibited at Flowers Gallery New York and Flowers Gallery Kingsland Road, London in 2017, to great critical acclaim. This series of monumental prints at root explores the paradox of existence played out between the artist and family, to the backdrop of a world in crisis as we start to adapt to the grip of the epoch of the Anthropocene.