Posters from the Basement 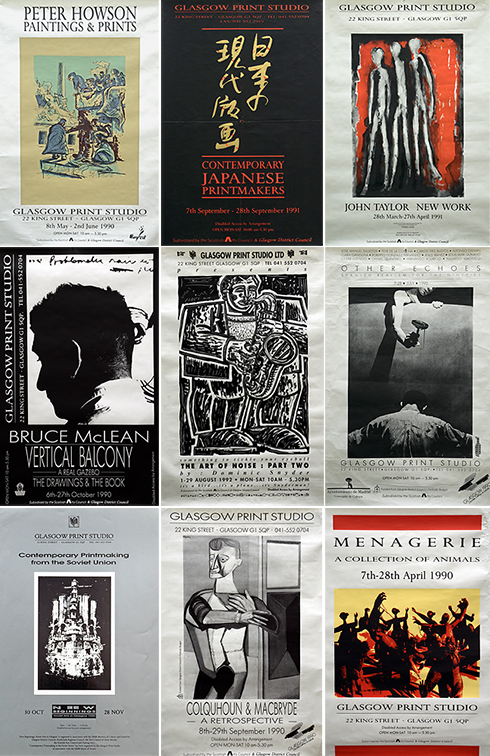 
From the 1970s until the 1990s, Glasgow Print Studio regularly screenprinted posters by hand for its own exhibitions and events. Designed and printed in house, they were distributed to venues around Glasgow and pasted up across the city. Many of the designs were very popular and were often stolen - as a preventative measure, some of the posters advertising Loveliest Night of the Year events were intentionally slashed with an X to try and prevent them being taken down. In the early days of the Studio, printing posters for other organisations and for commercial reasons also provided a stream of income. From the late 1990s, as digital print technology became more widely used, posters stopped being produced for every exhibition.

The works available for sale are left over from that time, and had been rolled up and forgotten in the Print Studio’s basement. The largest size posters would have been pasted up and consequently are particularly rare. The Bruce McLean works were originally produced for Third Eye Centre and are part of an edition of 250 copies, of which 50 were signed by the artist. The prints available here are from the unsigned part of the edition. The Bridget Riley posters were printed on high quality paper to complement the artist’s 1996 show at the Print Studio and include the image from her distinctive ‘Blaze 4’ print.