Glasgow Print Studio has been in collaboration with Engramme since 2007 facilitating the exchange of artists between our two organisations. Situated within Méduse in Québec there is a direct parallel between Méduse and our very own Trongate 103 in Glasgow in that each has a number of creative organisations housed under one roof. This manifestation is a collaboration between Glasgow Print Studio and Street Level Photoworks from Trongate 103 and with Engramme and Vu from Méduse . Five artists from Québec will have the opportunity to exhibit in this summer Glasgow and this will be reciprocated with an exhibition of work by Glasgow based artists at Méduse in November this year.

As part of this exchange, Glasgow Print Studio is pleased to present work by Armelle François, Denise Blackburn & Lisette Thibeault.

For more information on the organisations involved please see:

Denise Blackburn lives and works in Québec City and studied at the National and Superior School of Decorative Arts in Paris, France in 1989 & 1992, and at the School of Arts of Laval University, Quebec in 1986. Her work is held in Collection Loto-Québec , The Bibliotheque Nationale of Québec in Montreal, and at the Musee National des Beaux-Arts, Quebec.

My recent work shows my concern for a redefinition of the print in contemporary art; I revisit the presentation of prints outside the traditional framework, and through the freedom with which I swap the different techniques and methods, I propose a more open view of the print, based on the influence of other disciplines such as installation and sculpture. 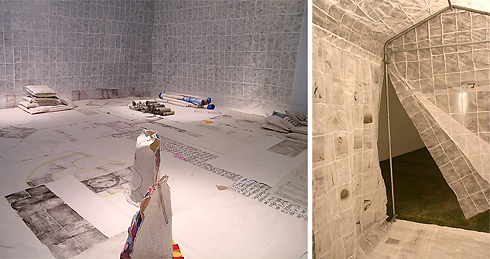 Armelle François lives and works in Québec City, she studied at l’Université Laval, Québec (2002-2004 & 1999-2002). Her artistic practice focuses on the installation. The central topic of her practice is the place in its identity dimension. She uses photography as well as everyday materials as the starting point of her work.

In reproducing these images I reclaim their semantic and emotional content. Reproduction processes as well as the accumulation of objects leads to some fragmentation corresponding to the reminiscence of involuntary memory by juxtaposing ideas without creating obvious links, other than the realisation. All my work is constructed by layering all of which are constitutive memorial strata of the human being.

Beginning with a formal repertoire of hundreds of organic elements, extracted from tiny lichen fragments that are found in the north part of Québec’s territory, Thibeault creates images with the aid of 2D imaging software, using multiplicity as a strategy in a search for unforeseen symmetry. The images created are then transferred, through a photogravure process onto a plate in order to be used as a matrix in a traditional printing process.  The resulting image is a complex graphic network of inextricable sinuous lines and connections, provoking extrapolations between the image and the imagination, a saturated image of multiple interpretations.

Image: All photography courtesy of the artists and Engramme.